A black family whose ancestors built a seaside resort near Los Angeles a century ago, only to have it taken from them by 'racist policies', will have the land returned, officials announced on Friday.

Los Angeles County plans to return prime beachfront property in Manhattan Beach that could now be worth more than $72 million to descendants of the black couple, Willa and Charles Bruce, who built a seaside resort for African Americans.

The story of the Bruce family caught the eye of a Los Angeles county supervisor who earlier this year started looking into what could be done to make things right, according to ABC.

The site, known as Bruce Beach, now has a county lifeguard training headquarters building on the property. It is along some of the most coveted coastline in Southern California.

The property encompasses two parcels purchased in 1912 by the Bruces, who built the first West Coast resort for black people at a time when segregation barred them from many beaches. They built a lodge, café, dance hall and dressing tents with bathing suits for rent. Initially it was known as Bruce's Lodge.

The Bruces and their customers were harassed by white neighbors, and the Ku Klux Klan attempted to burn it down.

Charles Bruce was often out of town, working as a dining car chef on trains to Salt Lake City, so it was Willa Bruce who bought the property and handled much of the business at the resort. She had purchased for $1,225 the first of two lots along the Strand between 26th and 27th streets.

'Wherever we have tried to buy land for a beach resort, we have been refused,' she told The Los Angeles Times in 1912.

'But I own this land and I am going to keep it.'

The Manhattan Beach City Council finally used eminent domain to take the land away from the Bruces in the 1920s, purportedly for use as a park.

Charles and Willa Bruce moved to Manhattan Beach from New Mexico with their son, Harvey, and bought land in 1912

Bruce's Beach and resort ran by the Bruces soon became a popular destination for black Americans, barred from other areas

Bruce Beach is seen in the 1920s, when the land was owned by a black couple, Charles and Willa Bruce

The Bruce descendants will reclaim the lot, and will be able to lease it to the city if they wish

The Manhattan Beach seafront lot was renamed Bruce's Beach in 2006, after its original owners

Janice Hahn is the member of the Los Angeles County Board of Supervisors who heard about the family's plight and decided to do something about it. Duane Shepard, a spokesman for the descendants, said that the forced sale of the land was a 'scar' on his family's history 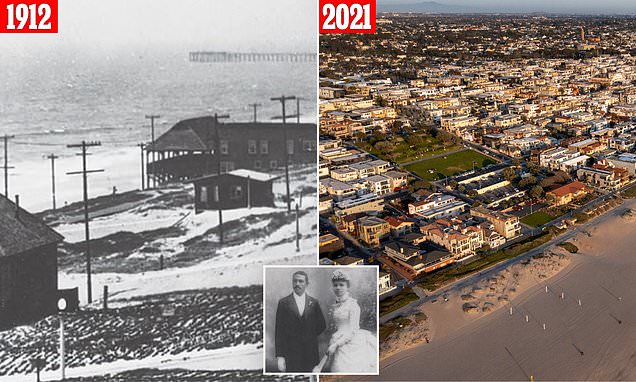 Plan would return beachfront taken from Black family in '20s

Los Angeles County on Friday announced that a parcel of land in Manhattan Beach will be returned to descendants of Charles and Willa Bruce, who were forced to sell in 1921.

I am certain our ancestors are rejoicing over the return of stolen land to this family. They have stolen from each and every one of our families, no matter our country of origin. May this and the next generation of the Bruces family continue to build wealth from this land.
Last edited: Apr 10, 2021

This makes me so happy!!

This is a wonderful thing. I'm very happy for this family. I hope they are able to make it all that Bruce and Willa dreamed it would be.
F

So happy for their small victory!

It's a shame how our progress is always sabotaged in an effort to make or keep us needy and dependent.

That’s a lovely story, I hope the descendants are able to manager this estate and make their ancestors proud and have it be a big asset in the black American community.

I am happy about this news. I can’t help but think “I hope the descendants are still black”.

winterinatl said:
I am happy about this news. I can’t help but think “I hope the descendants are still black”.
Click to expand... They came from Texas, Kansas, Arkansas, Florida, Michigan, and the District of Columbia. A few arrived from Northern California, and several just drove down from Los Angeles. Most had never seen the…

They came from Texas, Kansas, Arkansas, Florida, Michigan, and the District of Columbia. A few arrived from Northern California, and several just drove down from Los Angeles. Most had never seen the…

What a beautiful family! And a nice reunion I bet.

This brought tears to my eyes.

That is so beautiful! Words I needed to hear.

I am so happy to see this!
You must log in or register to reply here.

Swimming In The Black Community: How Racism Is Drowning Us
5 6 7