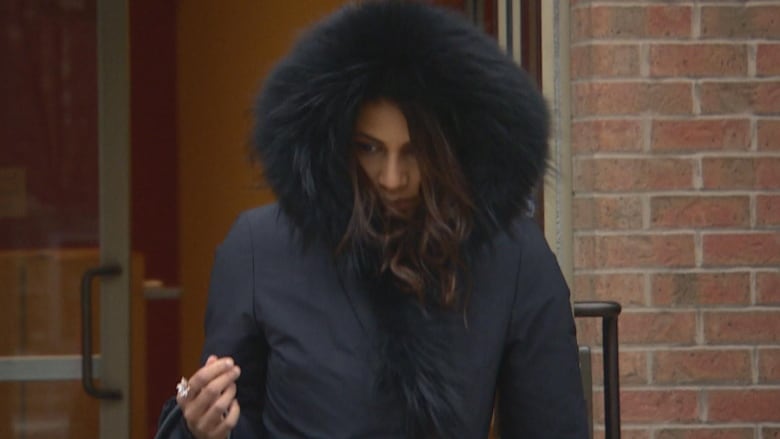 Theepa Sundaralingam, 37, a former oncologist at the Rouge Valley Health System, had her licence revoked on Wednesday by the College for Physicians and Surgeons of Ontario. (Robert Krbavac/CBC)

What began as flirting evolved into sexual touching and intercourse — sometimes at the hospital, other times at the patient's family home, the disciplinary panel heard.

All the while, Sundaralingam continued to treat the man, who cannot be identified due to a publication ban.

The panel heard that seven months into the relationship, Sundaralingam told the man she'd fallen in love with a colleague and broke off the affair. Shortly afterward, she refused to see him or treat him.

Her behaviour was deemed "sexual abuse and disgraceful, dishonourable and unprofessional conduct," in an agreed-upon statement of facts.

Sundaralingam was, according to her patient, "the person who both managed my health and provided me with emotional support during cancer treatment.

"She was the same person who abandoned me at my most vulnerable point," he said in a victim impact statement read aloud by a lawyer.

"I was physically emaciated and emotionally exposed and the loss of a critical relationship defeated me," he continued. "I feel abused and it's very difficult as a male to come out and say that about a female."

After a short deliberation, Sundaralingam was told she was losing her licence and ordered to put up a security of $16,000 for any therapy her former patient might need. She was also ordered to pay $6,000 — the cost of Wednesday's proceedings.

"Your actions are abhorrent and reprehensible. Even if revocation was not mandatory, the committee would have made such an order," one of the panel members said.

Asked as she was leaving the hearing if she had anything to say about the decision, Sundaralingam's lawyer, Jenny Stephenson, replied: "No comment."

In a statement, the Scarborough Health Network of which Rouge Valley is a part, said it "is committed to ensuring the health and safety of all our patients. We will move forward in accordance with the decision of the College of Physicians and Surgeons of Ontario."

Either A Blessing Or A Lesson.

I don't know why it's so hard for people not to poop where they eat. If you have a professional relationship with someone then DON'T. Just. DON'T. unless you're on your way out the door.

Hmmm, well at least he's still alive. He survived cancer but has a broken heart and wounded ego. I wonder how long this went on before she ended it.

....SHE definitely should have known better.

That’s a lot of money to give up.
Foolish. Not even going to get into the ethical issues.
G

She's stupid on so many levels. She doesn't even know how to effectively dump a man. How is a cancer patient in a hospital bed considered fit to be a cut buddy ? Maybe she's crazy.

She was unprofessional , but I don't see why she owes him anything.

And they say women are petty. She ain't never coming back now bro.

I don’t know how I feel about this one. They both were two consenting adults, but I understand that he was a patient with cancer so he was in a vulnerable situation and she took advantage but I could also see this scenario in the movies where at the end they fall in love and live happily ever after like that movie “Me Before You” without the ending. She is morally and ethically wrong for what she did, but I think he’s just mad because of the way she dumped him, plus he has cancer he ain’t got nothing to lose, whereas she has everything to lose. I just don’t know what she was thinking. Personally I would be afraid if I broke up with him he would grow bitter and come after me. People just don’t think about the consequences of their actions. He must have be cute. I wish they showed a picture of him.

Why didn't she just transfer his care to another doctor first?

Either A Blessing Or A Lesson.

ladysaraii said:
Why didn't she just transfer his care to another doctor first?
Click to expand...

ladysaraii said:
Why didn't she just transfer his care to another doctor first?
Click to expand...

Some people need the thrill of doing things that are forbidden and going against the rules. I'm guessing the excitement wore off as he got sicker. She was wrong but I'm finding it hard to muster up empathy for a vindictive man regardless of his health situation. I can't help but wonder if she lost interest after finding out what he's really like.

She was dumb and unethical, but they both agreed to it. He’s just mad.

There are power imbalance situations that compromise your ability to consent, and the person most in charge of your specialist health care is one of them. A doctor having sex with their patients brings the potential for all kinds of problematic ethical situations. Doctors should not be doing their patients, at all.

It may be trivializing it to make it about sex but I agree in general. Her quality of life is changing overnight. She won't ever be able to pay off her student loan debt but maybe its not as expensive to become a doctor in Canada. Even if she doesn't have crazy student loan debt I'm sure she's got a car and a mortgage and she just complicated her life over some foolishness.
S

I hope it was worth it.

Great way of breaking it down!

Southernbella. said:
I hope it was worth it.
Click to expand...

Probably not ...I could see her being very heavily fined, and maybe having to practice under supervision for a period, or having to go to therapy, but not losing her license.Wonder if the outcome would be the same had this been a man.

^^^ And then good luck trying to build up your practice again because the internet is forever. Who would want to hire her?

This reminds me of that resident who got drunk and started assaulting the Uber driver and got kicked out of school. Where is she now? Apparently she was able to switch specialties and is now a psychiatrist but as soon as her name pops up the whole incident overshadows her practice. It’s barely been 3 years though:

I am glad they took away her licence. I hope it is for good. So unethical. Glad he reported it. This is one time I am 100 percent behind the man.

It sounds so wrong to get into a sexual relationship with someone you're treating for a life-threatening disease.

Refer to the college scandal thread. She probably didn't earn her degree at all. If she did, there'd be no way she'd jeopardize her livelihood for this particular peen. SMH
Last edited: Mar 13, 2019

I see it all in a new light.

chocolat79 said:
Refer to the college scandal thread. She probably didn't earn her degree at all. If she did, there'd be no way she'd jeopardize her livelihood for some this particular peen. SMH
Click to expand...

He's just salty. She should've referred him to another oncologist before engaging in a relationship with him before not after the deed, however, they were both consenting adults in this matter.

wow..he's a cancer patient. I'm sure at some point, there are some psychological stress or even dire emotional needs. He was taken advantage of and it sickens me that a doctor would do something like that with a patient. Yuck.
I agree w/ who says this Indian doctor likely didn't earn her degree in the traditional sense.. in hindsight that could be a possibility, for her to throw away her credentials like that.

LiftedUp said:
He's just salty. She should've referred him to another oncologist before engaging in a relationship with him before not after the deed, however, they were both consenting adults in this matter.
Click to expand...

The doctor/patient relationahip doesn’t fall under the consenting adults umbrella.

The doctor is in a position of authority, controls your access to health care, and for some patients have a degree emotional bonding with because the physician is leaned in during an emotional/traumatic event in their lives.

They are unequal footing from the beginning of the relationship.
S

chocolat79 said:
Refer to the college scandal thread. She probably didn't earn her degree at all. If she did, there'd be no way she'd jeopardize her livelihood for this particular peen. SMH
Click to expand...

Pat Mahurr said:
I see it all in a new light.